Sadly, it appears our luck did run out on Friday, in a very painful way.

The news has been confirmed by multiple sources that veteran storm chaser Tim Samaras; his son, Paul Samaras; and chase partner Carl Young, are among those killed by Friday’s EF-3 tornado in El Reno, OK. This was a post on Tim’s Facebook page by his brother, Jim: 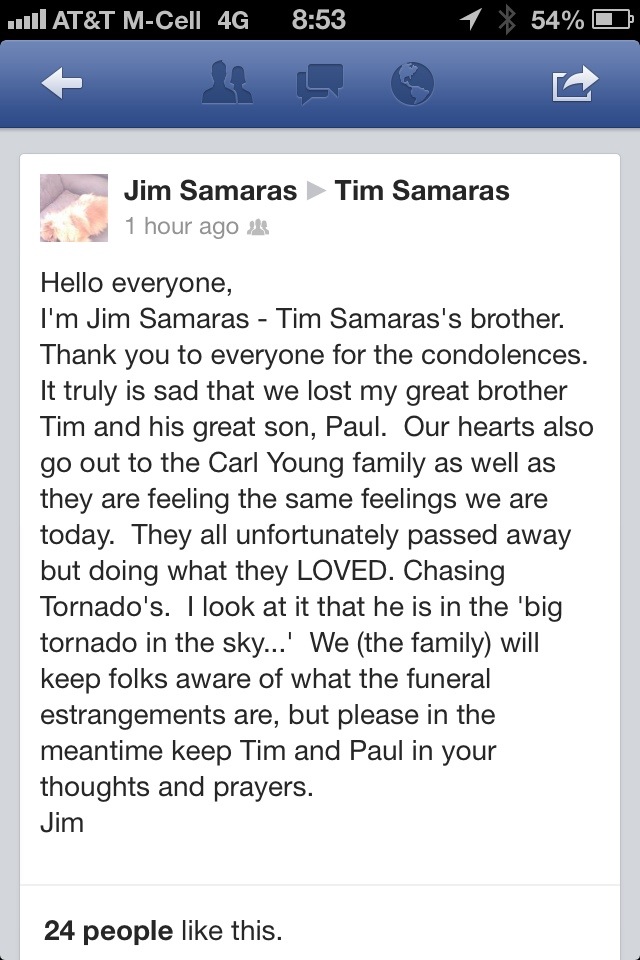 [9:52am EDT UPDATE: A message has been posted on the TWISTEX Facebook page, confirming this sad news.

Tim was the founder of TWISTEX and a featured chaser on the Discovery Channel’s series, Storm Chasers. He was known throughout the show and the chase community as a conscientious and safety-minded chaser, and TWISTEX research has resulted in numerous peer-reviewed publications and conference presentations.

The exact circumstances of their deaths are not clear, but it appears they were killed in the tornado, making them the first people known to be killed while storm chasing. (Note – Sunday 1:25pm EDT: There are two cases where storm chasers were killed on their way to or from a chase, and two other documented instances when storm spotters were killed., but this would be the first time anyone chasing or pursuing a storm has been killed. Thanks to John Keyes, Alex Lamers, and Rick Smith, all of the NWS, for the info.)

Their loss will be felt across the research and chase communities for a long time.

I met Tim at a Baron Services ‘best practices’ training in 2005, where he gave a presentation about his camera probe project. He graciously volunteered to speak at the annual SKYWARN training in Abilene, Texas, where he gave a very engaging presentation. He stayed late to answer the last questions from the last folks to leave and even signed a few autographs. He left quite an impression on me and on those at the training session, and it saddens me greatly that he is gone.

My heart and prayers go out for them and for their families during their time of loss. And this is a painful reminder of what all families who suffer loss in tornadoes go through. Deaths in tornadoes are not a faceless statistic or number to report – each represents a grieving family, and we would do well to remember that.

May your memories be eternal, Tim, Paul, and Carl!