Naming winter storms – the next step

Nor’easter off the coast of New England, March 26, 2014. NASA/MODIS image courtesy of University of Wisconsin SSEC.

In the fall of 2012, The Weather Channel announced they would begin naming winter storms.  The move was hailed by marketing and social media experts, but it was generally panned by the rest of the weather enterprise.  For its part, the National Weather Service issued a statement once TWC named the first storm 2012 saying, “The NWS does not use named winter storms in our products”, a position reiterated numerous times since.

A Bomb With No Name

Fast forward to today, when we have a monster nor’easter winding its way off the coast of New England.  By some accounts, it is one of the strongest (if not the strongest) nor’easter since 1993, and it will be remembered for the very strong and rapid intensification on the afternoon of March 26, in addition to whatever direct meteorological impacts occur to New England and the Canadian Maritimes.

I was surprised to learn that TWC did not name the storm.  When I asked (admittedly, with a little snark), both Nick Walker and Sean Breslin from TWC replied that the storm did not meet the population criterion for naming storms:

@nsj Nate, it did not meet the criteria of affected population to qualify.

@nsj From what I heard, this storm doesn’t cross the population threshold to allow naming.

This resulted in a number of folks chiming in on Twitter, asking what that population criterion was exactly or claiming that whether a storm gets a name or not was driven by ratings.

@nsj I was thinking the EXACT same thing! If there is EVER a time to name winter storms it’s this one!!

@wxdude @nsj in other words, not enough of a potential ratings boost.

These are all echoes of one of the biggest and most pointed critiques of the project: Whether a winter storm gets a name is determined by a single private entity using standards they have developed with little or no input from others in the community.  Contrast this with the parallel of naming tropical storms and hurricanes where the community has entrusted the process to a single public entity using open and agreed-upon standards and where the decisions (and data used in making those decisions) are available for real-time review by the community.

To its credit, TWC has explained parts of the process they use to name winter storms.  They also participated in a discussion about naming winter storms with other broadcast meteorologists and explained more about their process in a formal conference presentation at the American Meteorological Society’s most recent annual meeting.  While they have said they are working toward a more objective process and have agreed to take official NWS warnings into more account, they concede some subjectivity remains in whether a given storm will get a name.

At both AMS meetings, TWC said they would like for the National Weather Service to take over the project; however, NWS has said they won’t use TWC’s names and has shown no public interest to date in taking it over. 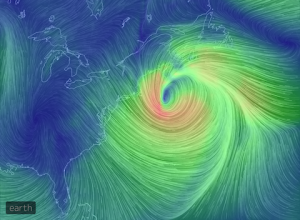 A Proposal for Moving Forward

Assuming the NWS still does not wish to take over naming winter storms, what if we approached this collaboratively across the weather enterprise?  Develop an enterprise-wide working group tasked with developing standards, implementing those standards in naming winter storms, and publishing both its own review of those standards and the data and work product used in implementing them.

The working group would need to be large enough to incorporate representation from a wide range of organizations and sectors, including but not limited to major players like The Weather Company and AccuWeather, representatives from media outlets like TV stations and newspapers, and meteorology and communication experts from the academic sector.  Obviously, if the National Weather Service wanted representation, that would be excellent.  The group would also need to be sufficiently large to prevent any one bloc from dominating the discussion and to allow the group to work effectively even if some fraction of the membership cannot make a given coordination call on a given day.  Similar to the United Nations, membership would delineated by “seats” with each group getting a certain number of seats but being free to appoint whom they choose to the working group.

Once convened, the group would begin from TWC’s winter-storm-naming standards from the last two seasons and develop:

Once we get back into winter, the group would schedule calls as needed to discuss particular storms and whether they get names.  The group would be responsible for documenting the factors (and vote totals) that went in to naming or not naming.  It’s important to note that this group would only determine whether a given storm would get a name; however, unlike the National Hurricane Center analogue, this group would not issue forecasts.  Their representative outlets would be able to communicate and forecast the storm as they saw fit.

Once the final winter storm for a season has come and gone, the group would, like the National Hurricane Center does, self-evaluate and formally publish a review of each storm that got a name or was formally discussed but was not named, the data and methods used, and proposed changes and improvements for the following season.  The group could also conduct or coordinate research for the communicative effectiveness of this approach not only on social media but everywhere and make recommendations for improving enterprise-wide communication.

An enterprise-wide working group to develop and administer an open-standards-based program to name winter storms would address most of the concerns raised about The Weather Channel’s unilateral approach.  It would be inclusive of a wider range of stakeholders, it would develop open standards for what should constitute a named storm, and it would allow for third-party evaluation and replication of the process.  It would also very likely increase the adoption of the names beyond their current reach and would make it more likely that different governmental entities and media outlets would use the same name and social media hashtag for a given storm.  It would also go along way toward mending fences between TWC and other weather enterprise partners, many of whom felt left out of the process two years ago.

I am under no delusion that such a process would be easy or would itself be without controversy.  As the debate over this has raged, legitimate questions have been raised about the efficacy of naming storms in the first place as well as to what extent regional differences, affected population, and official NWS warnings and advisories should be incorporated.  Further, even the National Hurricane Center gets a share of criticism on decisions to name or not name individual storms.  However, bringing together such a working group should eliminate the criticism (fair or not) that storms are simply being named to drive up TV ratings or website clicks.  Plus, if the notion that everyone using the same name will reduce confusion and increase awareness holds any water, the positive effects would only be multiplied with more entities and outlets using the names.

UPDATE (Thursday 3/27): The Weather Channel addressed why this storm didn’t get a name this morning, including the specific population thresholds they use.

9 Responses to Naming winter storms – the next step